FOOD ALLERGY – IS AVOIDANCE THE ONLY OPTION?

Following on from Allergy Awareness Week 2022, we’re continuing the discussion about food allergies and the experiences of those who live with them. In this blog, we discuss the current ‘avoidance’ approach to allergies and how this impacts allergy sufferers as consumers, along with new research that has the potential to relieve some of the stress for those living with food allergies and their families.

An important distinction to make when discussing food allergies is the difference between an allergy and an intolerance:

A food allergy occurs when the body’s immune system reacts unusually to a certain food. Symptoms can range from mild itching, swelling and reddening all the way to a severe allergic reaction (anaphylaxis) which can be life-threatening.1

A food intolerance is when an individual has difficulty digesting certain foods. This can lead to gastrointestinal discomfort such as bloating and stomach pain but can also involve symptoms such as rashes and itching that are similar to the symptoms of allergies.2

The symptoms of food intolerance tend to happen more gradually than an allergic reaction, and after consuming a more considerable amount of the food, whereas allergic reactions can be triggered by just traces of the allergen.2

Living with a food allergy

While food allergies can emerge at any age, the majority tend to develop during childhood.3 It is also possible to ‘outgrow’ an allergy, so the incidence of food allergies are higher in children than adults, affecting approximately 5–8% of children and 1–2% of adults in the UK.4

The two main treatments for an allergic reaction include taking antihistamines in the case of mild to moderate reactions, or adrenaline, which is used to treat an episode of anaphylaxis.1 In those with a severe allergy, an adrenaline auto-injector should be kept on hand at all times, and both the individual and those around them should be pre-prepared as to how to administer this in case of emergency.1

For those who experience severe allergic reactions, managing the condition can be a life-long consideration, which plays a big role in their everyday life.

The pitfalls of the avoidance strategy

With no known cure for food allergies, a strict avoidance approach is the best way to reduce the risk of an allergic reaction. While an allergic reaction for some is an inconvenience, for those who suffer from severe reactions, contact with the allergen could put their lives at risk.

While the advice sounds simple on the surface, in reality, food avoidance must be practiced for an extended time (often for life), and it isn’t without its downfalls:

1. The constant need to be vigilant

When you or your dependent suffers from a food allergy, you take on the responsibility for ensuring that all food sources are safe, and all other avenues of exposure are identified and prevented. This may include making special arrangements with schools, carefully reading food packets (and hoping that everything is correctly labelled), or even having to ask that those around you refrain from consuming your trigger food. Ultimately, this can be exhausting and lead to feelings of anxiety in children, teens and their parents.5

Avoiding food allergens may involve missing meals out, family gatherings, or activities with friends, along with a lack of spontaneity, as every meal must be planned out and checked for allergen risks in advance. Children with allergies may even be asked to sit at a separate lunch table from their friends in an attempt to avoid contamination. This whole experience can be very lonely for those living with a food allergy.6,7

3. Reliance on others for your or your child’s health

A difficult part of the process for those avoiding certain food groups is the need to relinquish control and rely on others. Will the other children at school take your child’s food allergy seriously? Did the waitress think of all possible sources of the allergen when declaring the dish as safe? Could a stranger on the bus start eating your trigger food? Allergens can be introduced accidentally with no malicious intent but it’s something sufferers are constantly aware of.

4. The knowledge that as careful as you may be, accidents can still happen.

Possibly the hardest part of the avoidance method is the knowledge that it’s not infallible. However careful you may be, and for all the planning you may do, accidents can still happen with disastrous consequences. News stories such as the death of Natasha Ednan-Laperouse after consuming an incorrectly labelled product may be rare but are a stark reminder of this fact.8

For those who experience severe allergic reactions, the risk of accidental exposure to allergens is a major setback of the avoidance method.

Is avoidance the only option?

In an ideal world, there would be a way to reduce the damage caused by accidental allergen exposure, so that the avoidance strategy still works day-to-day, but the chance of a severe attack from contaminants or trace sources of an allergen is minimised. A new form of treatment, currently in development, aims to do just that.

The treatment, known as oral allergen-specific immunotherapy (OIT), involves gradual exposure to a known allergen in a controlled way, with the intention of decreasing sensitivity over time.

Over the past couple of years, several clinical trials have provided compelling evidence in favour of this treatment.9,10 In one particular trial funded by the National Institutes of Health (NIH), it was found that in highly peanut-allergic children between the ages of one and three years, OIT desensitised the majority of participants to peanuts and induced peanut allergy remission in a fifth of children investigated.11,12 This brings this type of therapy one step closer to becoming a reality for those living with food allergies.

In this trial, remission was classed as the ability to tolerate five grams of peanut protein (which is equivalent to one and a half tablespoons of peanut butter) without having an allergic reaction, six months after completion of immunotherapy.11,12 The benefits of this type of result are immeasurable in terms of the peace of mind for those affected by severe allergies. While this won’t enable them to consume the foods freely, it could provide a level of relief when it comes to accidental exposure – with a larger quantity of the allergen required to cause a reaction.

In 2021, a form of OIT known as Palforzia (arachis hypogaea) – a strictly measured regimen of peanut protein powder– gained approval as a treatment for severe peanut allergy in the UK.13–15 This is already being hailed as life-changing by those living with peanut allergies15 and will hopefully pave the way for OIT use in a wider range of food allergies.

What does market research tell us about the experience of living with a food allergy? 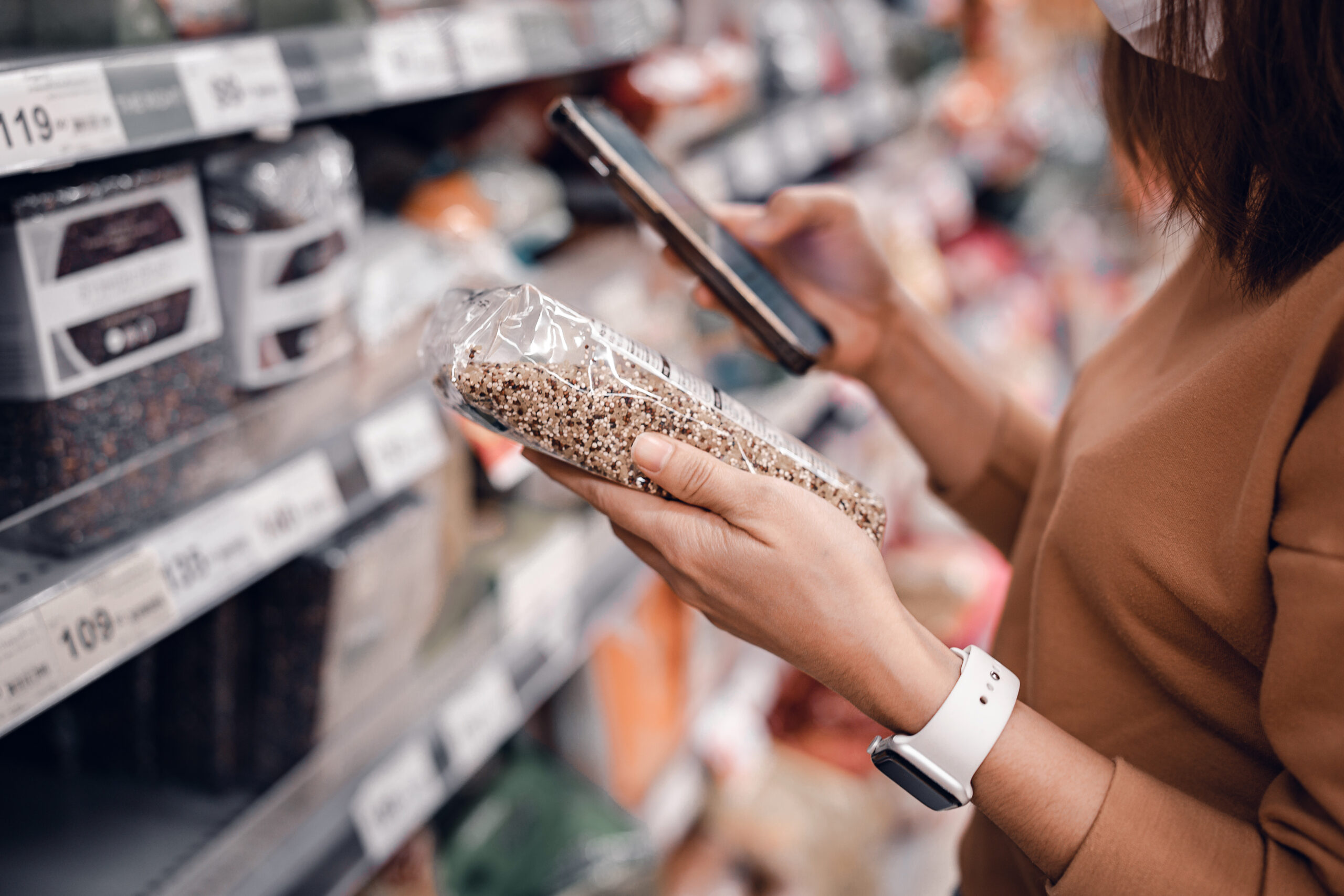 There is a lot that can be learned about the experience and daily life of allergy sufferers and their families, from their habits as consumers. It’s also worth noting that, with so many of those living with allergies being children, it is the parents who are responsible for purchasing their food. A 2020 McKinsey report,16 into the topic of food allergies came to some interesting conclusions around the way these demographics shop.

Allergen-conscious consumers have been shown to often cut out entire food categories to reduce exposure risk and, on average, will spend more time scrutinising packaging labels.16 Beyond this, they are willing to invest financially in their food choices, with many choosing to pay extra for the highest-quality ingredients along with being likely to spend more money on their groceries in general.16

In terms of brand and product loyalty, these are consumers who are more likely to trust smaller brands with a known ‘allergy-friendly’ stance, than large brands.16 Beyond this, they are in general highly brand loyal, consistently repurchasing the products that they know and trust.16

Overall, this report paints the picture of a demographic who place huge importance on the food products that they purchase and are willing to invest both time and money to get the best and safest option. In terms of potential for brands, for those who put the effort into catering to the needs of allergy sufferers correctly, there is the potential to attract an extremely loyal following through targeted marketing.

Improving the quality of life for allergy sufferers in the future

Ultimately, as marketers it’s important to understand our target audience, be it their everyday experiences, difficulties or hopes for treatment in the future. When it comes to food allergies, market research focused on the way families carry out their weekly shop and attitudes to specific brands can be hugely beneficial.

As revealed in the McKinsey report, food labels are critically important for the allergy avoidant consumer, with huge strides forward made in 2021 when Natasha’s law (named for Natasha Ednan-Laperouse) was introduced in the UK.17 This expanded the requirement for full allergen labelling to include pre-packaged food prepared on the premises it is sold. But there is still more that could be done when it comes to optimising food allergen labelling practice, with food allergen labelling in the skincare and cosmetics industry being a potential focus for the future.

As for now, avoidance therapy may remain the safest option when it comes to food allergy management. However, there are ways this strategy can be improved upon and developed, both from a medical perspective and a marketing one. As always, the foundation of these future developments in healthcare and marketing should be the experience and needs of allergy patients and their carers today.